Eating Oxygen – Invention of the Century 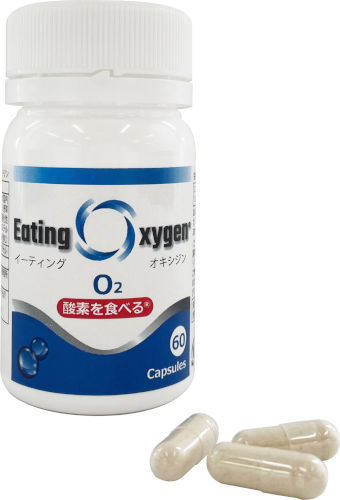 The “Eating Oxygen ” is a natural health “Made in Japan” product that has been developed by the Japanese inventor through a unique patented manufacturing process in Japan. The Eating-Oxygen is also called an amazing invention of the century.
Oxygen is the most abundant element in the earth’s crust and in your body. The 43 kilograms of oxygen are found in the body’s water (which makes up 70% of total body weight), proteins, nucleic acids, carbohydrates, and fats.
Human survival requires food, water and oxygen. The most critical and immediate of these basic necessities is oxygen. An inadequate supply of oxygen is called “hypoxia” and may cause symptoms such as, Lack of energy, Shortness of breath, Reduced mental clarity, Suppressed immune system, Joint/Muscle aches & pains.
Take Eating Oxygen for a better performance, before sports activities, or any energy consumed activity. One dose of Eating Oxygen will boost human body performance. Since, Eating Oxygen is not a Drug or chemical product, this natural product can be use before any sport competition for maximum performance.

Importance of Oxygen for Health

It is now said that 90% of the diseases are caused by free radical, while the remaining 10% are infectious diseases such as colds, AIDS, tuberculosis etc. People become oxygen deficient due to various environmental changes such as Westernization of diet, tobacco, air pollution, etc., which generated free radical in the body.
Our body is made of about 60 trillion cells. Hair, skin, blood vessels, and all organs are made up by individual cells. In other words, if the cells are healthy, the body functions are active and healthy. Free radical oxidized and injures the cells. By oxidizing the cells, many diseases such as cancer, arteriosclerosis aging etc. are caused.
Free radical injures the cells; it rapidly penetrates and attacks DNA of the gene. The injured cell undergoes mutation; the original gene is broken and transformed into cancer cells. The cancer cells then undergo a chain reaction and proliferate indefinitely. In this way, free radical is deeply involved in the onset of cancer. Eating oxygen can remove the free radical, so that our body can absorb pure oxygen efficiently. Also, by preventing oxidation, our body cells, genes, blood vessels, trachea, organs, are leads to health.

Importance of Oxygen for Beauty

When we cut an apple and air touch it, the apple immediately starts changing the color. Similarly, cellular oxidation damage the skin that cause the aging. Free radical caused various damage from the inside of the skin. In addition, free radical is generated by ultraviolet rays, it makes collagen hard at the back of the skin, and excessive melanin which result, non-resilient and dull skin. Eating Oxygen, remove free radical and rejuvenate from the skin cells, which result, dull skin becomes to a beautiful and shiny skin without stains and wrinkles.

Free radical oxidizes and damages the body cells and weakens the power to make energy. As a result, energy metabolism decreases and consumption of sugar as a fuel also decreases. Sugar remaining in the blood is turned to “body fat” and accumulated in the body by reducing consumption of sugar, which is the raw material of energy. As you can see, accumulation of body fat progresses steadily, eventually leading to obesity. In order to break this obesity mechanism, it is best to get rid of free radical. “Eating oxygen” removes free radical from the cells with its strong reducing power. In addition, protecting cell oxidation promotes energy production, so we can expect a diet effect. Eating oxygen stimulates the burning of fat by activating the circulation which turns fat into energy.

The Eating Oxygen has resulted from years of research, testing and dedication, which made this natural product to an exceptionally safe and high-standard for human health. To avoid risk of fake product, always buy Eating Oxygen from the stores/websites that are verified & recognized by EatingOxygen.com or by Japan Anti Fraud Organization. Also double check if it is really Japanese product at Made in Japan Organization